, /PRNewswire/ -- The PNC Financial Services Group disclosed today that it has met its 30 percent carbon reduction goal four years ahead of plan. PNC set this goal, along with an energy reduction goal, in 2009 with plans to reduce its carbon emissions and energy consumption by 30 percent by 2020. Since 2009, PNC has reduced its energy consumption by 28 percent and expects to meet its 2020 goal before the end of 2017.

"As we have long been committed to these goals and worked hard every year to make continuous improvement, this progress is especially meaningful," said , PNC's director of . "We recognize that environmental concerns, including climate change, may impact our business, our clients and the communities in which we operate, and that by reducing our operations' emissions, we can lessen our impact while serving as an example to others."

PNC's 2016 Corporate Social Responsibility (CSR) report, which was produced in accordance with the Global Reporting Initiative, the world's most widely-adopted CSR reporting framework, outlines the bank's environmental performance, as well as its efforts to consider the best interests of all of its stakeholders. Specifically, it highlights how PNC's focus on operating with integrity allows the company to reduce its environmental impact, strengthen communities, help customers achieve their goals, and empower employees to grow, all while pursuing the highest standard of ethical business practices and risk management.

"Our commitment to corporate social responsibility is the very embodiment of a philosophy that shapes every decision impacting our customers, communities, employees and shareholders and has never been more important," said PNC Chairman, President and Chief Executive Officer . "By doing business with integrity, doing what is right by the people we serve and looking out for the best interests of all of our stakeholders, we have created a culture that enables PNC to thrive and grow."

Below are several 2016 highlights that demonstrate this commitment.

In addition to highlighting key progress, policies and initiatives, PNC's CSR report features Q&As with several company executives, including Board member . These Q&As, which provide additional context around specific aspects of PNC's business, can be found on PNC's CSR website. 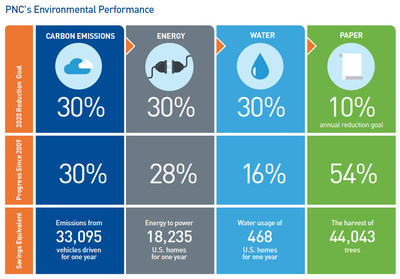 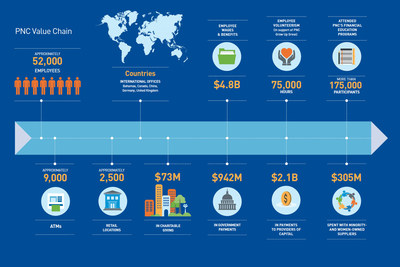 To view the original version on PR Newswire, visit:http://www.prnewswire.com/news-releases/pnc-meets-30-percent-carbon-reduction-goal-ahead-of-plan-300427739.html