PDF Version
- PNC Survey shows optimism has shifted significantly to a more moderate level since the spring.
- More than half anticipate increases in sales and profits.
- One in three say it's harder to hire qualified employees than it was six months to a year ago; leading cause - inadequate skills and experience.
- Majority do not plan to increase employee wages, citing current compensation not affecting hiring or retention.

, /PRNewswire/ -- Optimism among business owners and leaders remains high, but has shifted significantly to a more moderate level according to the PNC Economic Outlook, a biannual telephone survey of small and medium-sized business owners, which began in 2003. 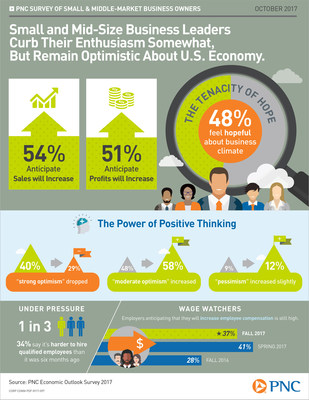 The share of respondents who described their outlook for the U.S. economy as strongly optimistic dropped from 40 percent to 29 percent, balanced by those with a moderately optimistic outlook rising from 48 percent to 58 percent. Just 12 percent of business owners and leaders expressed pessimism, up slightly from an all-time low of 9 percent in the spring.

"Small businesses are a key source of economic activity and employment, and owners' perceptions can be good indicators of what's to come," said , chief economist of The "The overall findings from our survey confirm that the U.S. economic expansion, now more than eight years old and the third-longest in U.S. history, will continue into 2018."

Further solidifying the anticipation of continued growth, more than half of business owners and leaders anticipate increases in sales (54 percent) and profits (51 percent) during the next six months, an increase over fall 2016, but a slight drop from post-election highs reported in spring 2017.

Hiring Under Pressure: One in three (34 percent) say it's harder to hire qualified employees than it was six months to a year ago. Specifically, manufacturing and construction sectors most frequently cited hiring difficulties. The top challenges in hiring cited were:

When offered as a response for the first time in the survey's history, one in 20 (5 percent) cite issues with candidates' abilities to pass required controlled substance screening.

"Hiring has become more difficult across all skill levels," said Faucher. "Organizations even report that they have turned down business because of a lack of workers. That said, the one ongoing problem with the economic expansion remains persistently soft wage growth. Given the low unemployment rate and consistent complaints from firms about the difficulty in finding workers, wage growth should be stronger. Wage growth is likely to pick up as the job market continues to tighten."

Wage Watchers: The proportion of employers anticipating to increase employee compensation continues to be relatively high, with 37 percent expecting to do so, a slight dip from 41 percent in the spring, but still well above the 28 percent from fall 2016. Among the majority (58 percent) who do not anticipate increasing pay, most believe their provided compensation is sufficient – either asserting that their current compensation level isn't affecting hiring or retention (34 percent), or that the pay is competitive for the industry (32 percent).

Certainly Uncertain About Policy: Thirty-six percent of respondents expect policy changes from the new administration and to have a positive impact on their business over the next year if they were to go into effect. One in eight (13 percent) anticipate a negative impact (a small increase over 9 percent in spring 2017), while 40 percent are unsure and 11 percent anticipate no effect.

Methodology
The PNC Economic Outlook survey was conducted by telephone from , among 500 businesses within with annual revenues of . Sampling error for the national results is +/- 4.4 percent at the 95 percent confidence level. The survey was conducted by (www.ArtemisSG.com), a communications strategy research firm specializing in brand positioning and policy issues. The firm, headquartered in , provides communications research and consulting to a range of public and private sector clients.

This report was prepared for general information purposes only and is not intended as specific advice or recommendations. Any reliance upon this information is solely and exclusively at your own risk.