PDF Version
-- PNC survey shows 88 percent - highest ever - are optimistic about U.S. economy
-- 94 percent are highly optimistic about the near-term outlook for their own business
-- Nearly 70 percent anticipate positive results from the possibility of tax reform

, /PRNewswire/ -- Optimism among business owners about the U.S. economy and the outlook for their own businesses has reached levels never-before seen in the 15-year history of the PNC Economic Outlook, a biannual telephone survey of small- and medium-sized business owners. 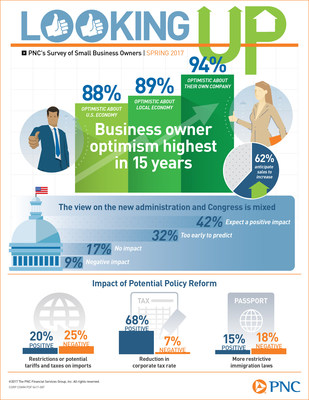 "The hope we noted in the fall survey, has for many, turned into enthusiasm and is consistent with other indicators of improved confidence," said , chief economist of The . "It remains to be seen, however, if this increase in optimism will convert into improvement in real economic activity."

Among survey participants, expectations for the performance of their own company also markedly have improved. Ninety-four percent are optimistic about their own company's outlook for the next six months, compared to 85 percent in the fall and last spring.

"Though economic fundamentals have not changed appreciably since the fall, it is encouraging that business owners are anticipating greater sales and profits," Faucher said. "These are key indicators we look for when predicting broader economic growth."

The survey also examined business owners' thoughts on the new and Administration in , and their view is somewhat mixed. Overall, four in 10 (42 percent) say they expect the policies of the new administration and , in general, to have a positive impact on their business this year. One-third (32 percent) say it's too early to predict and 17 percent say it will have no impact. Only nine percent anticipate a negative effect.

"Business owners are hopeful about the pro-business stance they are seeing from , and are eager to see what regulation and policy changes may be ahead," Faucher said. "But they seem to be taking a wait-and-see attitude, as it takes time for these kinds of changes to generate longer-term impacts."

In fact, only 44 percent of business owners surveyed say they would anticipate a bump in profits if regulations were eased or eliminated. When it comes to hiring, one-third (32 percent) say reductions in regulations would have a positive impact.

But business owners are more evenly divided when it comes to the impact of potential trade restrictions or tariffs: 33 percent are in support, 32 percent oppose and 31 percent are unsure.

A digital package containing national and regional survey results is available on PNC's website at http://pnc.mediaroom.com/digital-packages.

The PNC Economic Outlook survey was conducted between , by telephone within among 1,843 owners or senior decision-makers of small and mid-sized businesses with annual revenues of . The results given in this release are based on interviews with 500 businesses nationally, while the remaining interviews were conducted among businesses within the states of , , , , , , , and plus Sampling error for the national results is +/- 4.4 percent at the 95 percent confidence level. The survey was conducted by (www.ArtemisSG.com), a communications strategy research firm specializing in brand positioning and policy issues. The firm, headquartered in , provides communications research and consulting to a range of public and private sector clients.

To view the original version on PR Newswire, visit:http://www.prnewswire.com/news-releases/small-business-owners-confidence-about-us-economy-own-business-soars-to-record-highs-300450069.html